1. Turn the laptop over and unscrew the screw that holds the bottom cover. Then, carefully remove the cover with a plastic card around the edges.

2. Disconnect the battery cable from the motherboard and unscrew the 3 screws as shown in the photo (marked in yellow). Now we take out the battery from the laptop. Part number battery 33YDH Dell for replacement.

For upgrade the RAM, hard drive, SSD drive, it is not necessary to remove the battery and unscrew the 3 screws, only to disconnect the battery cable from the motherboard.

Pull two latches here to pop the Memory module up at 45 angles, and then pull out the module at that angle. Buy memory for Dell G5/G7 laptop

3. Disconnect all cables as shown in the photo. A cable that is circled in a green circle turns off upward. All other cables are disconnected to the side.

For upgrade Hard Drive: unscrew the 4 screws and disconnect the SATA cable to remove or replace the hard drive.

For upgrade M.2 SSD: unscrew one screw to remove or replace the M2 SSD.

To remove the WI-FI module, unscrew one screw and remove the protective plastic fastener, then detach the wires.

Next to the WI-FI module there is another cable (marked in green), too, disconnect.

5. Unscrew all screws M2.5X6 (marked in yellow). And unscrew the 4 screws that are under the hard drive (not showed on the photo)

10. Unscrew the 7 screws (marked in yellow) and disconnect the 3 cables (marked in green).

11. Unscrew the 6 screws on the cooling system of the laptop and lift the thermal tubes up.

12. Remove the old thermal paste from the processor and thermal tubes.

It is necessary to clean the old thermal paste very carefully. The CPU or GPU crystal can be damaged by hard objects, use only soft materials!

13. Apply thermal paste evenly over all the crystal surfaces of the CPU and GPU. If necessary, you can clean the fans from dust. Install the cooling system back and screw 6 screws.

Possible problems: As soon as you assembly the laptop, turn the laptop over, plug the power connector and the laptop will turn on. The fans will automatically turn on at full power, the keyboard backlight will turn on and charging indicator on the panel will light up orange instead of white. After the laptop switches itself off. After pressing the power button, it again turned on, turned off after 3-4 seconds and switched on again with an error in the BIOS. Go into the BIOS, do not change anything, just save the settings and exit the BIOS. After the laptop normally loads the operating system. This is because during disassembly of the laptop, the bios battery is disconnected and therefore an error may appear. 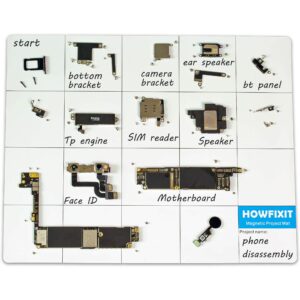